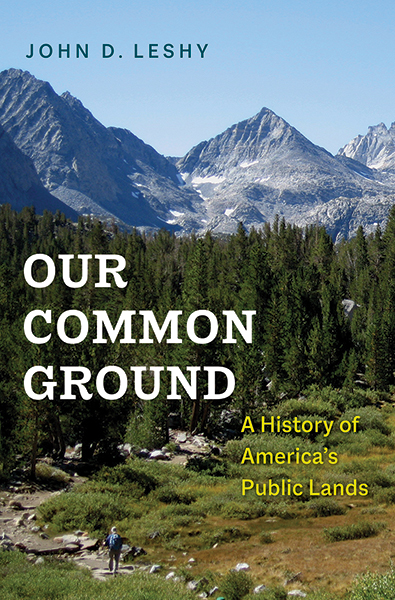 From the beginning, and continuing today, the federal public lands have played important roles in American history.  Now the United States owns more than 600 million acres, about 30% of all land in the country.  These public forests, mountain ranges, mineral deposits, wetlands, deserts, and shorelines hold economic opportunities and also give us many landscapes that western historian and author Wallace Stegner described as “filling up the eye and overflowing the soul.”

The public lands have inspired valuable history and literature from writers such as John Muir, Aldo Leopold, Bernard DeVoto, and Terry Tempest Williams.  The works to date have addressed specific subjects—events, people, policies like multiple use and wilderness, and systems such as national parks and forests.  Learning about this large and fascinating institution as a whole will make it easier to understand its place in modern America, its pros and cons, and, for example, to comprehend how, in this capitalistic country, so much land is still owned by the United States.  There has never been a comprehensive book—a great book—treating public land history in a full, single narrative.

Our Common Ground meets that need and John Leshy is the right person to do it.  A Harvard Law School graduate, over the past half century he has been a leading scholar and celebrated teacher dedicated to public land history, policy, and law.  He has taken on numerous assignments for presidents, Congress, and federal agencies.  Most notably, he served as Solicitor, the top legal official in the Department of the Interior, for eight years under Secretary Bruce Babbitt.  He has always immersed himself in the history, believing that it is essential to understanding the law and policy.  I am confident that academics and public land participants would agree with me that Leshy knows more about the public lands than anyone in the country.

At 600 pages of text, this is a big book but it is a comfortable, general-audience read.  Leshy’s writing style is never legalistic or technical.  His writing is straightforward, engaging, and often humorous.  He brings in quotations from interviews and gives colorful examples of how many people, public figures and plain citizens, participated in or were affected by, historical events.  Our Common Ground puts forth some large and important issues, but Leshy doesn’t deal with them in separate chunks.  Instead, he brings them to us as chronological stories, era by era, over the course of the book.  This truly is the story of the public lands.

One of Leshy’s main objectives is to identify and dispel myths about the public lands.  They include the notions that public lands have been a divisive force in American life; that far too much land in America is held by the national government; and that current public land management tilts far too much toward conservation, recreation, science, sustainability, and cultural values.

Without doubt, those and similar sentiments do exist but Leshy believes that history shows a different pattern.  “Over many changes in administrations, public lands have played a consensus-building, unifying role in American life. . . .  In an age of skepticism about our political process, decision making about public lands demonstrates our ability as a people to work together and find genuine common good.”

The public lands date to the 1780s, when seven original states began donating to the national government their land claims west to the Mississippi River.  The public lands quickly became a darling.  New states were carved out of them and the westward expansion began.  Rail lines facilitated by the public lands extended as far as the Pacific.  Gold, silver, and other valuable minerals extracted from public lands brought the United States into the world economy.  The Homestead Act offered free land to settlers and inspired them and their families to establish homes in a new land.

But the popularity did not last.  By the end of the Civil War, speculators and dishonest development interests were working the system to obtain millions of acres and convert them into many millions of dollars.  Mark Twain called it “the Gilded Age.”  The public was not amused by the plunder.

Leshy singles out 1890 as the beginning of what he calls “the great transition,” which he identifies as the pivotal era in public lands history.  It began with a backlash that moved away from heavy extractive uses of public lands and toward uses that would create long-term community benefits.

In the early 1880s, a powerful movement rose up as towns, farmers, and ranchers realized that they needed pristine higher elevation public lands to assure sustainable supplies of clean water and sustained-yield timber harvests.  “People all around the West were already asking for such reservations.”  Congress responded in 1891, giving the president broad authority to set aside lands for national forests.  Individual communities then went to a receptive Washington, DC to establish national forests in their regions.

The national forest success spurred public land and water protection.  Yosemite and Yellowstone had already been created as national parks, but there was great interest in creating other “crown jewels of America.”  As with the national forests, local citizenries brought forth their favorite landscapes as candidates.  Congress named several new parks, including Mount Rainier, Crater Lake, and Mesa Verde.  Ever since, the number of national parks, and support for them, has continued to grow.

The pace of change accelerated when Theodore Roosevelt became president in 1901: “Roosevelt grasped many of the opportunities presented to him with both hands and left a huge imprint on national public land policy.”  Enjoying ardent public support, under his leadership Congress created more national parks and forests, established the first national wildlife refuges, and expanded federal management over public lands, minerals, and hydroelectric resources.

After TR left office in 1909, his conservation agenda dominated public land decisions.  New land set asides continued apace.  The Park Service and Forest Service expanded their operations with additional staff and programs.  Leshy and other historians commonly identify the Federal Water Policy Act of 1920 as marking the end of the Progressive Era and, implicitly, the “Roosevelt Era.”

Yet federal land policy continued, although less dramatically, to become ever more public.  Congress brought the public grazing lands, at 250 million acres the largest segment of public lands, under federal management.  The agencies and Congress adopted several wildlife initiatives.  During his 12 years as president, Franklin Roosevelt had “the most personal interest in the details of conservation policy of any president” save his cousin Theodore.  He issued major withdrawals prohibiting land areas from passing into private hands and purchased some 20 million acres of private land and made them public land.

In modern times, we are well aware of the environmental movement, wilderness, wild and scenic rivers, the National Environmental Policy Act, the Endangered Species Act, limits on old growth timber harvesting in national forests, and ever more expansive national forests, parks, and wildlife refuges.  As for attempts to transfer wholesale amounts of federal lands to states, industry, or individuals, Leshy reports they never have gained any genuine substantial traction.  Even James Watt, hero of the “Sagebrush Rebellion” and Secretary of the Interior for President Reagan, didn’t promote divestiture of federal land.  He only called for more control by private industry and he accomplished little of that.

“For more than a century, the arc of public land history has bent decisively toward the national government conserving more and more lands for conservation, public education, and inspiration.”  That is a strong statement.  Many people, including experts, who read this book will at first be taken aback by the expansive nature of Leshy’s findings; in reading the book, I was at first skeptical.  The myths that Leshy identifies had become part of the woodwork.  But the more I read, I realized how powerful and accurate his fully documented assessment is.

My expectation is that Our Common Ground will open up the history, current status, and future of the public lands to discussion and debate as never before.  This masterful volume will have staying power and we can expect it to be influential and constructive for generations to come.

Charles Wilkinson, Moses Lasky Professor of Law Emeritus at the University of Colorado, has written widely on western lands and is the author of Crossing the Next Meridian: Land, Water, and the Future of the West.